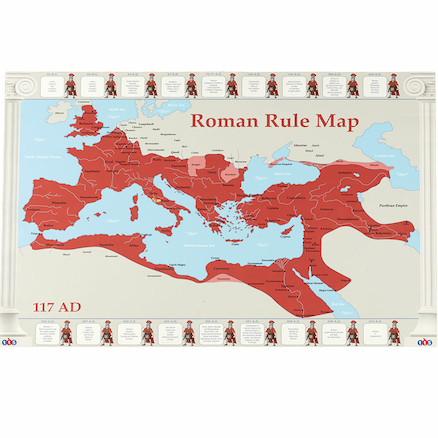 Roman Rule of Europe Map A1

A fantastic map of Europe that highlights the Roman Empire at its height in 117AD.
Read more

*Terms and conditions: 1. This offer is valid until 31.05.2022 and applies to selected full priced qualifying items only 2. Cannot be used in conjunction with any other offers and is subject to availability. 3. This offer can only be used once per customer. 4. TTS Group reserve the right to change these terms & conditions on reasonable notice. 5. Offer is only open to customers based in the UK (inc. Channel Islands and Isle of Man). 6. Discounts are applied to the ex-VAT sub-total amount. 7. Offer is applicable online only and excludes Items included in other promotions 8. Code: MAYSAVE22 must be added into the basket to activate promotion. 9. Use of the code MAYSAVE22 will supersede any other promotions that may have been activated.

A fantastic map of Europe that highlights the Roman Empire at its height in 117AD.

The ‘Roman Empire’ is shown in Red, with Roman city and seas and oceans named. The perfect tool to understand the vast power of the invader of Britain!

The map is also bordered by a timeline of the Roman Empire in Britain, beginning with Julius Caeser’s first invasion and ending with British independence. Included curriculum content such as British resistance, Hadrian’s Wall and much more.