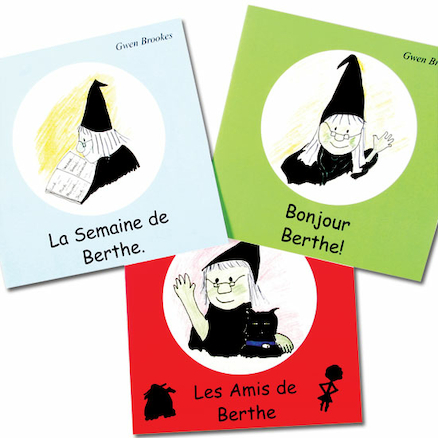 Join Berthe the Witch on her daily adventures.
Read more

Join Berthe the Witch on her daily adventures.

With simple language for French beginners, each book includes a word search, game and vocabulary list.

Pack A contains: Bonjour Berthe! introduces Berthe and her ice cream-loving cat and includes simple French. La Semaine de Berthe tells what Berthe does during the week; like playing rugby and burning cakes. It is written in the first person. Les Amis de Berthe describes Berthe’s unusual friends. Les Vacances de Berthe describes Berthe’s holiday, what to pack and what to do. Pack B contains: In Berthe Fait une Pizza - Berthe makes a pizza with some unusual ingredients. Quel Temps Fait-il, Berthe? Berthe doesn’t know what to wear as the weather keeps changing. This book is excellent for weather and clothes vocabulary. Berthe Va au Supermarché - Berthe goes on a shopping trip that ends in disaster. The French is slightly more difficult and uses some useful shopping vocabulary. La Famille de Berthe introduces Berthe’s unusual family. The French in the story is simple, but the images give scope for more advanced language.